Pine ‘Anchor & Squirrel’ Box with colour printed label to the lid and to the reverse, the sliding lid opens to a No. 4 Set of tri-coloured building blocks as patented in 1880.
German, circa 1882-1895

The original creator of the concept of building blocks, using images to recreate buildings and shapes, was a Friedrich Froebel in 1840. The originator of the ‘kindergarten’ saw the importance of developing children’s minds with the use of three dimensional and geometric shapes in the forming of structures using two dimensional drawings and instructions.

In an effort to overcome the instability of Froebel’s blocks, two brothers, Otto and Gustav Lilienthal, developed, in 1875, a method of making precisely shaped blocks using quartz sand, powdered chalk and linseed oil. Working with educationalist Dr Jan Georgens, they were able to create a new and more effective building block system.
Without sufficient marketing skills and funds to develop these blocks, the whole concept was sold to a wealthy entrepreneur, Friedrich Ad. Richter in 1880, who immediately took out a patent on the stones and started the construction of a factory to make them. He also implemented an art department where he employed artists, architects and illustrators, all essential for the creation of building plans for the Anker Stone Building Sets.
The factory was completed in 1882 and, using the trade label of a red squirrel, production began. By showing his product in as many exhibitions as he could, Richter was to win a total of 15 gold medals within the first year of manufacture. The red squirrel was to be replaced by the anchor with the introduction of the “New Series 1895”. The factory in Rudolstadt, with a total of 649 employees in 1910, was creating more than 40,000 sets of this incredibly popular toy and branch offices and subsidiaries were opened in Vienna, St. Petersburg, London and New York.
Production continued right through both world wars even though the factory found itself in the newly formed Communist East Germany, but production eventually ceased in 1963. The passion for Anchor Blocks never ceased though, and, on 15th September 1995, with financial help from the European Union and the state of Thuringia, the factory was reopened and production continues to this date. 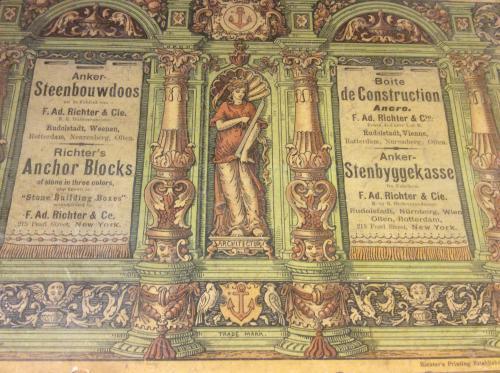 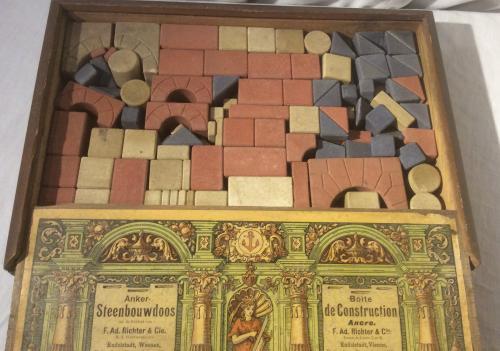